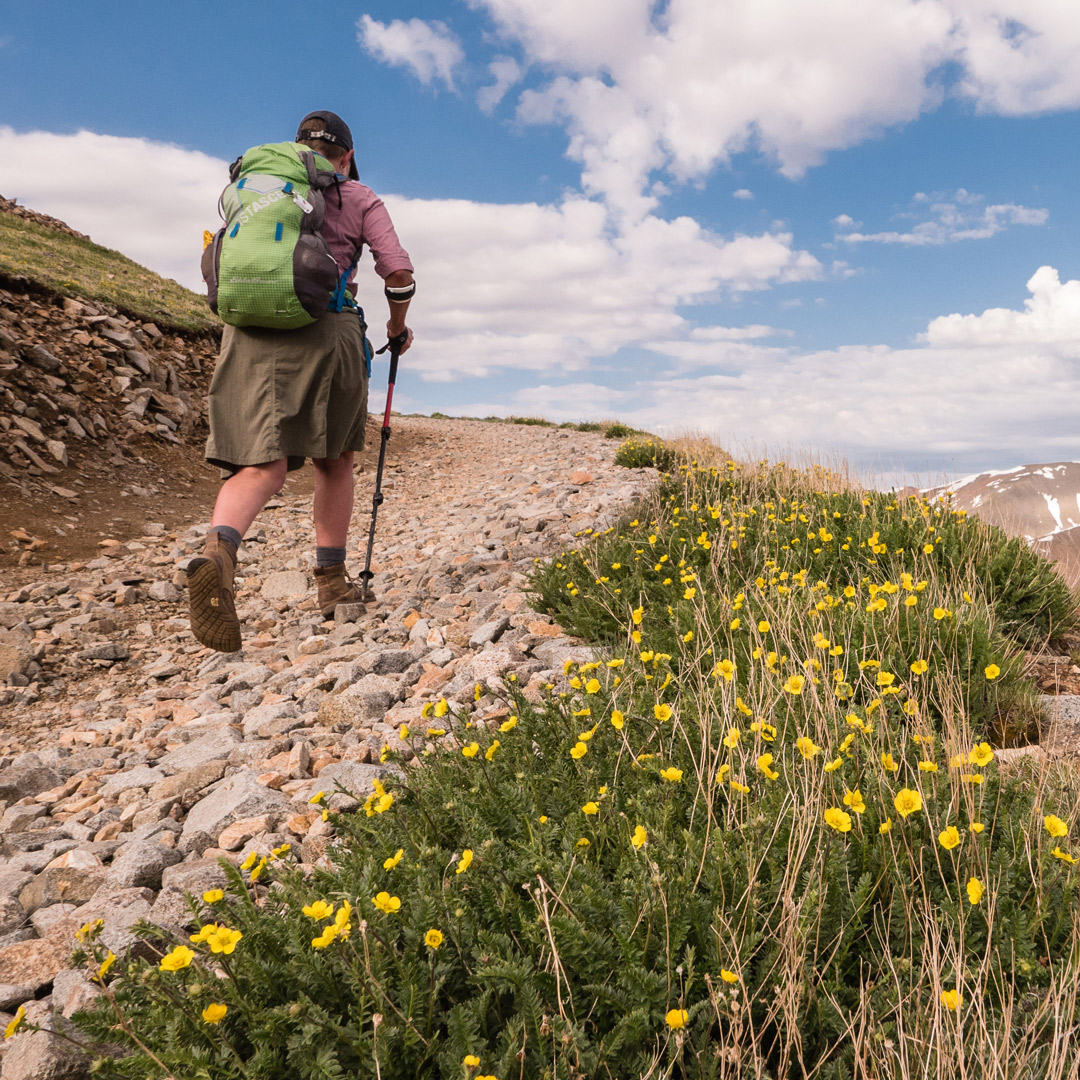 The newest of the “Long Trails,” the ADT runs through 15 states from California to Delaware. Even if you hiked all 6,800 miles of the American Discovery trail from sea to shining sea, you won’t find a more beautiful segment than in Buena Vista. Even among Colorado’s 1,153 mile portion, the scenic route through Chaffee County has among the highest awe-factor anywhere. Challenging and breath-taking, the local segment crosses the Continental Divide and leads through high alpine trails and mountain passes in the Collegiate Peaks Wilderness. Part of it follows the Colorado Trail and the Continental Divide National Scenic Trail, too. Climb past Lake Ann, descend into Taylor Park, and even hike by Mt. Princeton Hot Springs. From Buena Vista, trek to Crested Butte to the southwest or Leadville to the north. It’s even possible to follow this trail from Denver to Buena Vista – for a mere 227 miles. The country’s only coast-to-coast, non-motorized recreational trail, it is intended for hikers, bikers and horseback riders. 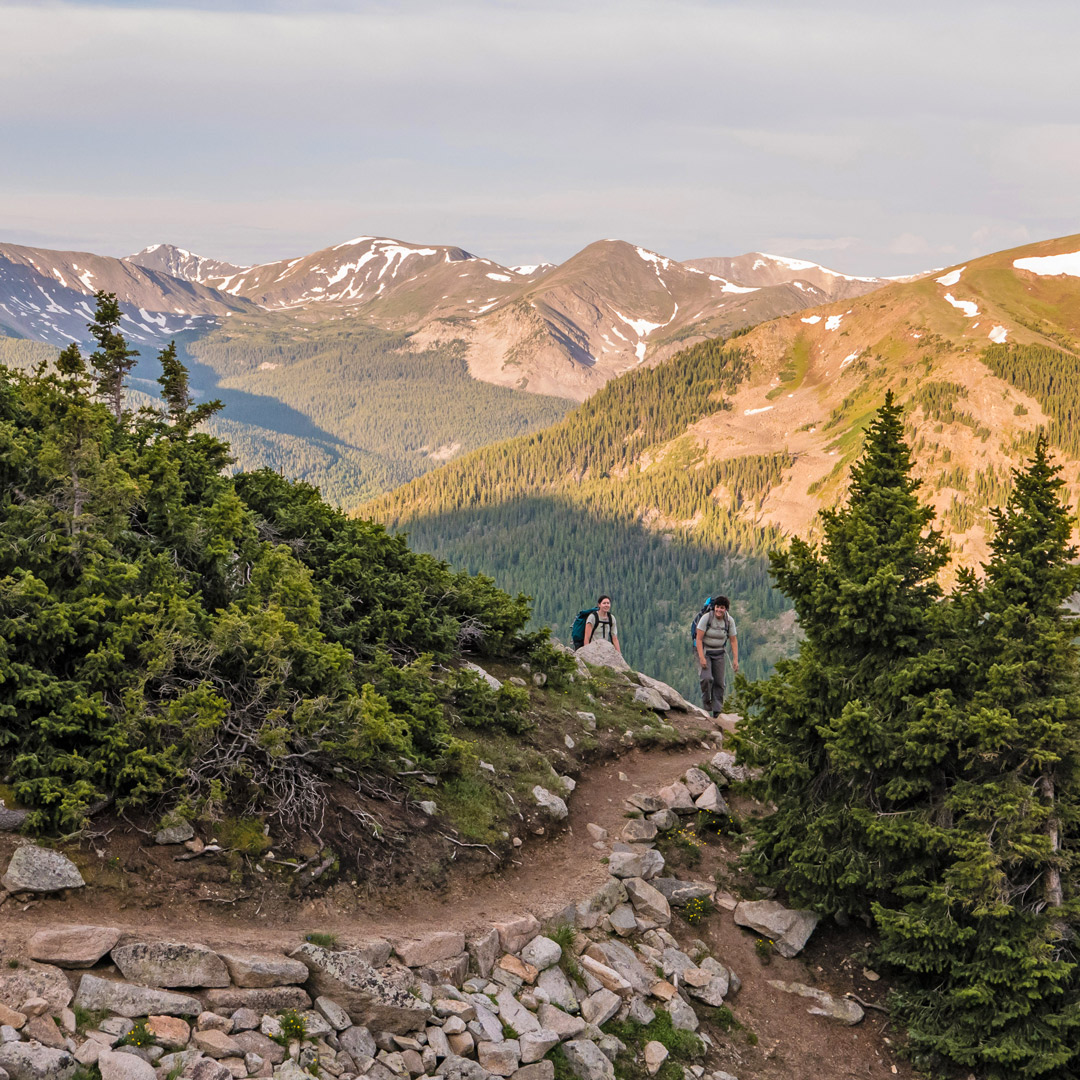 The famous long-distance Colorado Trail runs for 486 miles starting from southwest of Denver. It threads through Colorado’s most beautiful mountainous regions ending near Durango. This well-marked established trail leads hikers, bicyclists and horse riders through eight mountain ranges, six National Forests, and six wilderness areas. One of the most scenic stretches goes right through the heart of Chaffee County’s Collegiate Peaks and backcountry. Trailheads are numerous and some leads to trailheads for summiting fourteeners (mountains over 14,000 feet). Astonishing views, challenging elevation changes and high-elevation breathlessness are all part of the adventure. The trail often ascends above timberline, at 10,000 feet and higher. For about half the length of the trail, it runs concurrent with the Continental Divide Trail along the Collegiate East and West routes. Beginning at Monarch Pass just past Monarch Ski Resort, the trail’s western half is more remote with rewarding spectacular vistas and wildlife sightings. 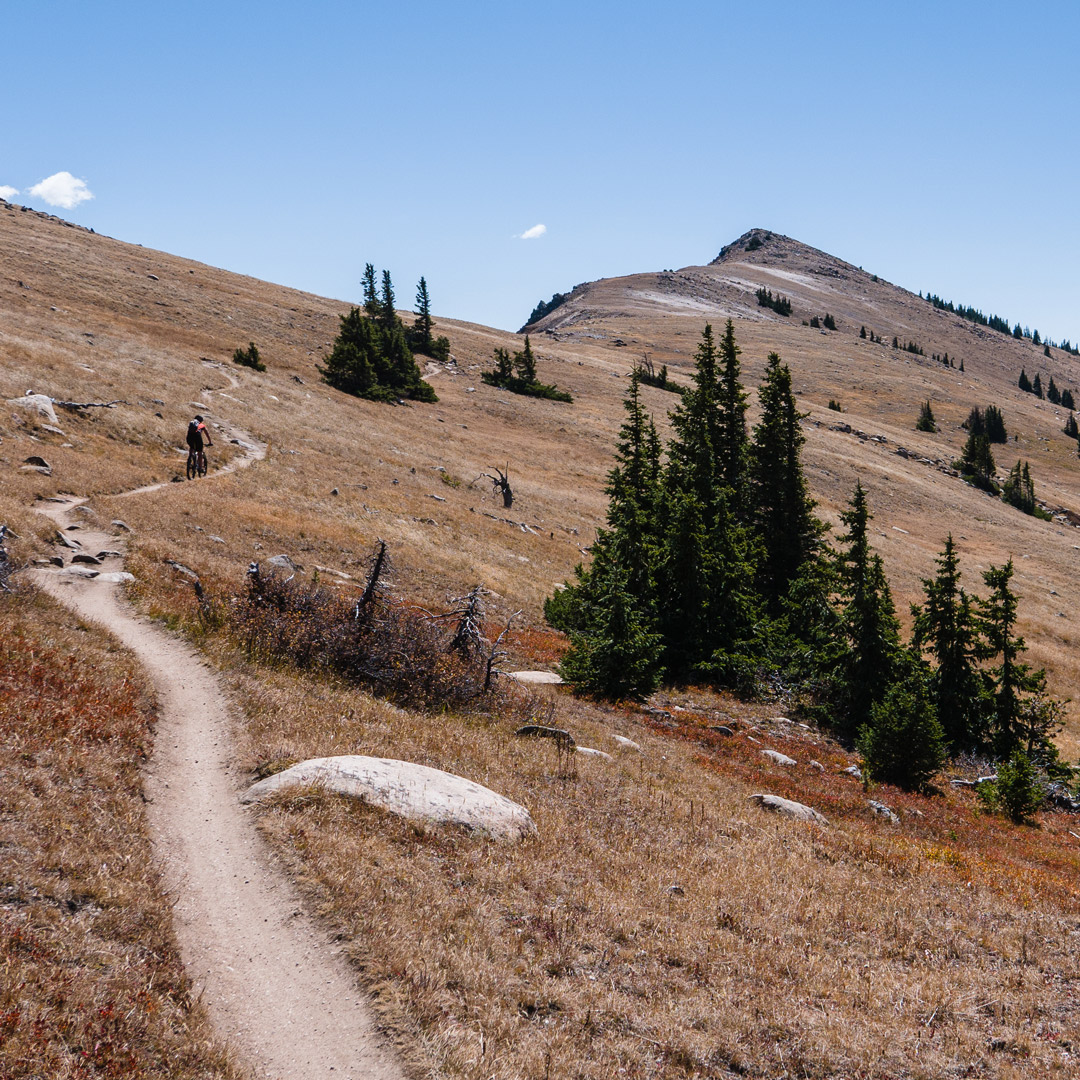 Considered one of the world’s greatest long-distance trails, the CDT runs through Chaffee County as part of its 3,100 miles. Along with the Appalachian Trail and the Pacific Crest National Scenic Trail, the CDT makes up the Triple Crown of Long Hikes. It begins in Canada and ends in Mexico, running through Montana, Idaho, Wyoming, Colorado, and New Mexico in-between. Some of the most challenging sections are found among the amazing scenery right here. The CDT is accessible from several areas near Buena Vista such as the Collegiate Peaks Wilderness and Texas Creek Road just off Cottonwood Pass. West of Salida, trek the CDT to the summit of Monarch Pass and from Poncha Springs hike to Marshall Pass. Along the trail discover other wilderness areas, the state’s highest peaks, ghost towns, lakes and reservoirs and possible wildlife sightings. The trail is named for the natural land phenomenon that divides all waterways to the west into the Pacific Ocean and everything to the east toward the Atlantic Ocean. It’s definitely a Bucket List trek for hikers, horseback riders, cross-country skiers and snowshoers. 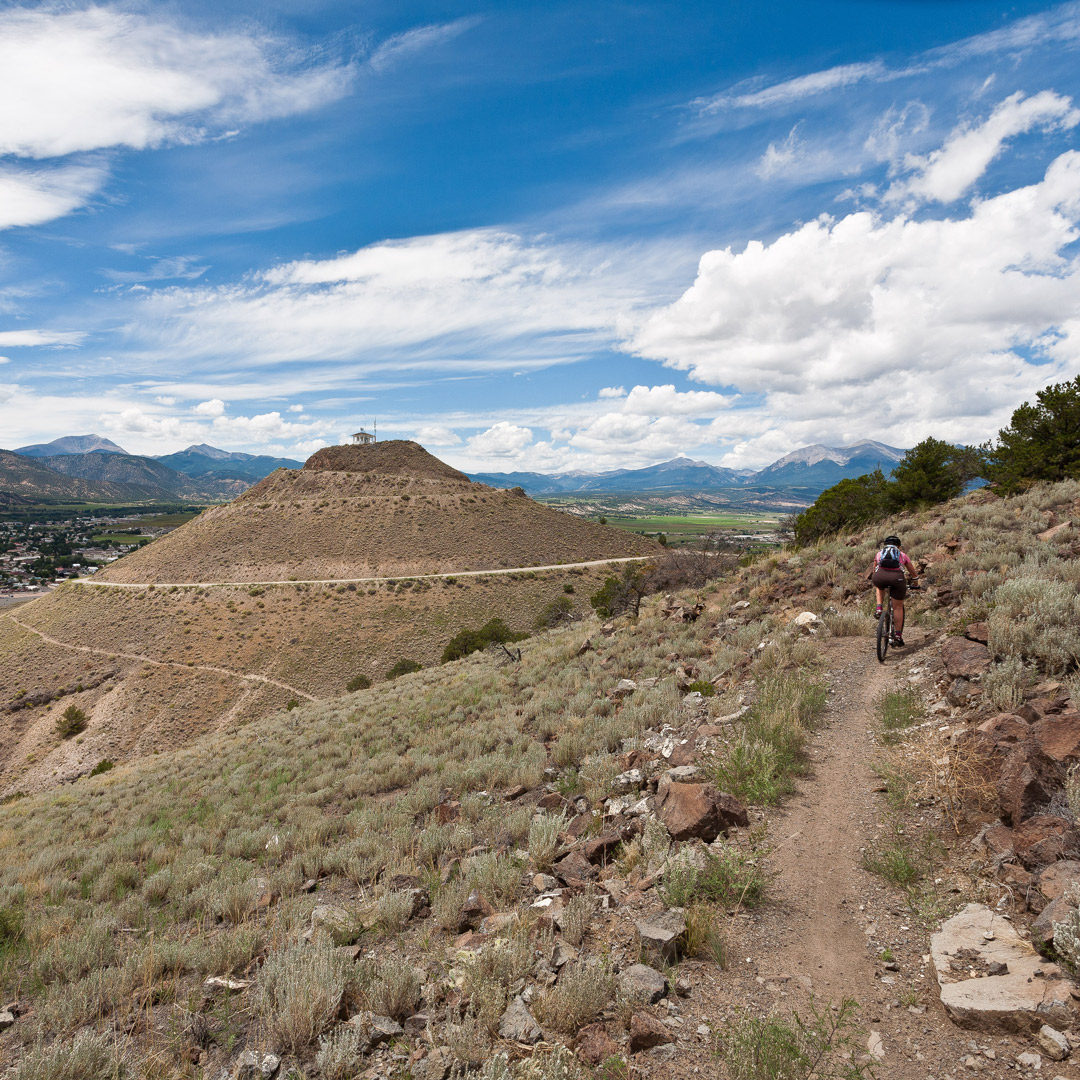 For close-to-town hikes and rides, the Salida Mountain Trails provides a vast and varied system without having to travel far. The Salida Mountain Trails and Arkansas Hills Trails are right across the Arkansas River and very walkable from historic downtown Salida. Traverse on and all around Tenderfoot Mountain, a.k.a. S Mountain, the town’s main natural landmark on the northeast side. Utilizing a stacked-loop design, there are trail for all levels. The lower trails are the easiest, with the most difficult and advanced trails found high and away. The moderate trails are in-between. All levels boast panoramic views of the Arkansas River Valley and surrounding Saguache and Sangre de Cristo mountain ranges. The trails also include a single track mountain biking system. This area is a great choice for year-round recreation thanks to the “banana belt” weather system that keeps it almost snow-free. This desert-like ecosystem faces south and has few trees, even though it is only about a 20-minute drive from Monarch Mountain Ski area. 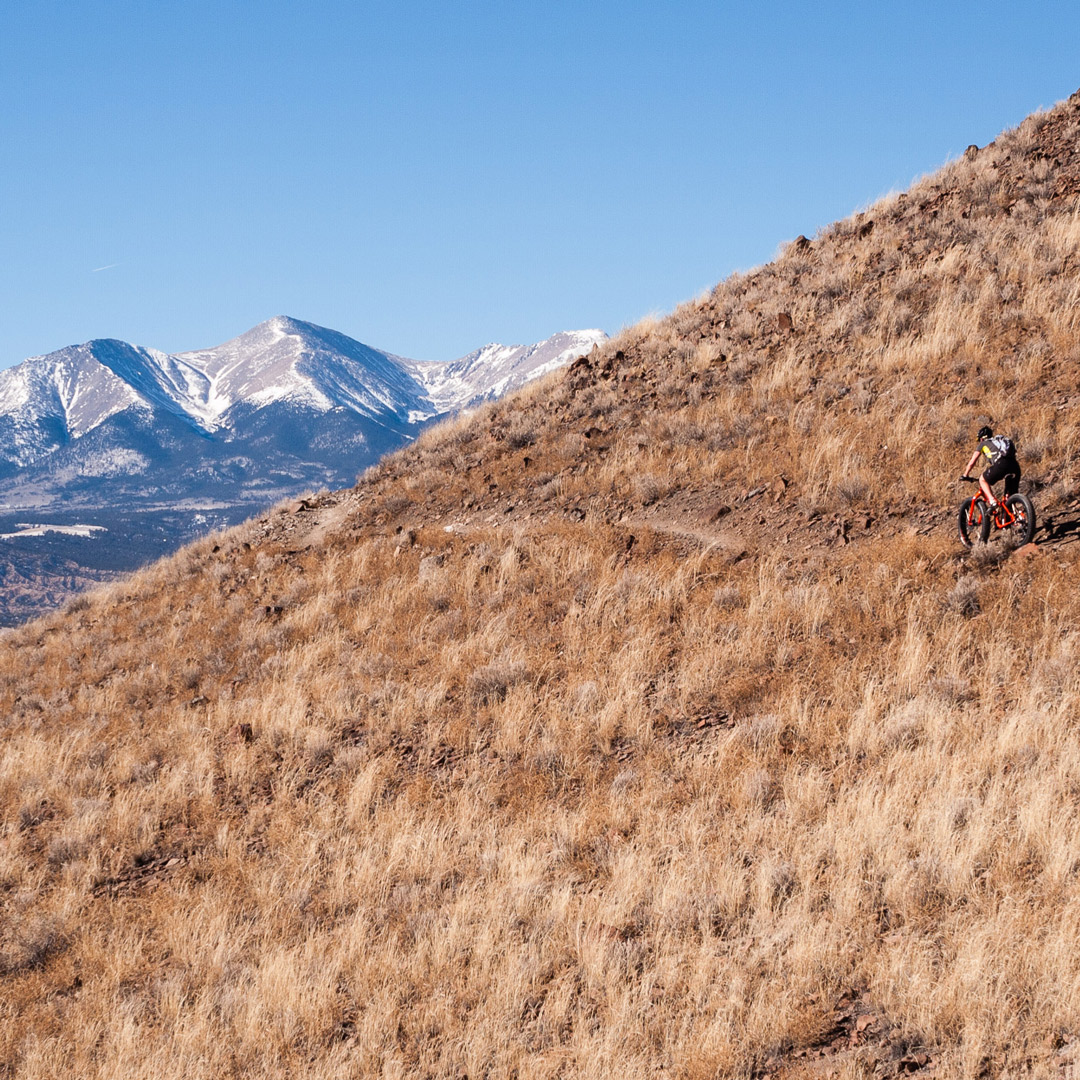 On Salida’s south side, explore the Methodist Mountain trail system. At 11,700 feet, Methodist Mountain is not the tallest peak on the block, but it has many great trails for mountain bikers, trail runners and hikers. Also a great year-round option, the landscape is high mountain desert punctuated with Pinon trees. It has enough trees for interest and perhaps a shady rest, but not enough to block the incredible views of the Arkansas Valley from this elevated vantage point. The area is home of the Rainbow Trails, from the Double Rainbow to the beginner-friendly Little Rainbow. The Little Rainbow’s wide and mainly smooth trail is slightly less than five miles and is ideal for all skill levels. Access the trail system from CR110 or CR108. A popular loop is found by taking the Columbine trail up to the Rainbow Trail to Bear Creek Road (CR 101). The Double Rainbow is a more difficult out and back, because of steep-to-severe climbs and near-blind turns. The whole system can be accessed by bike or shuttle from downtown Salida. 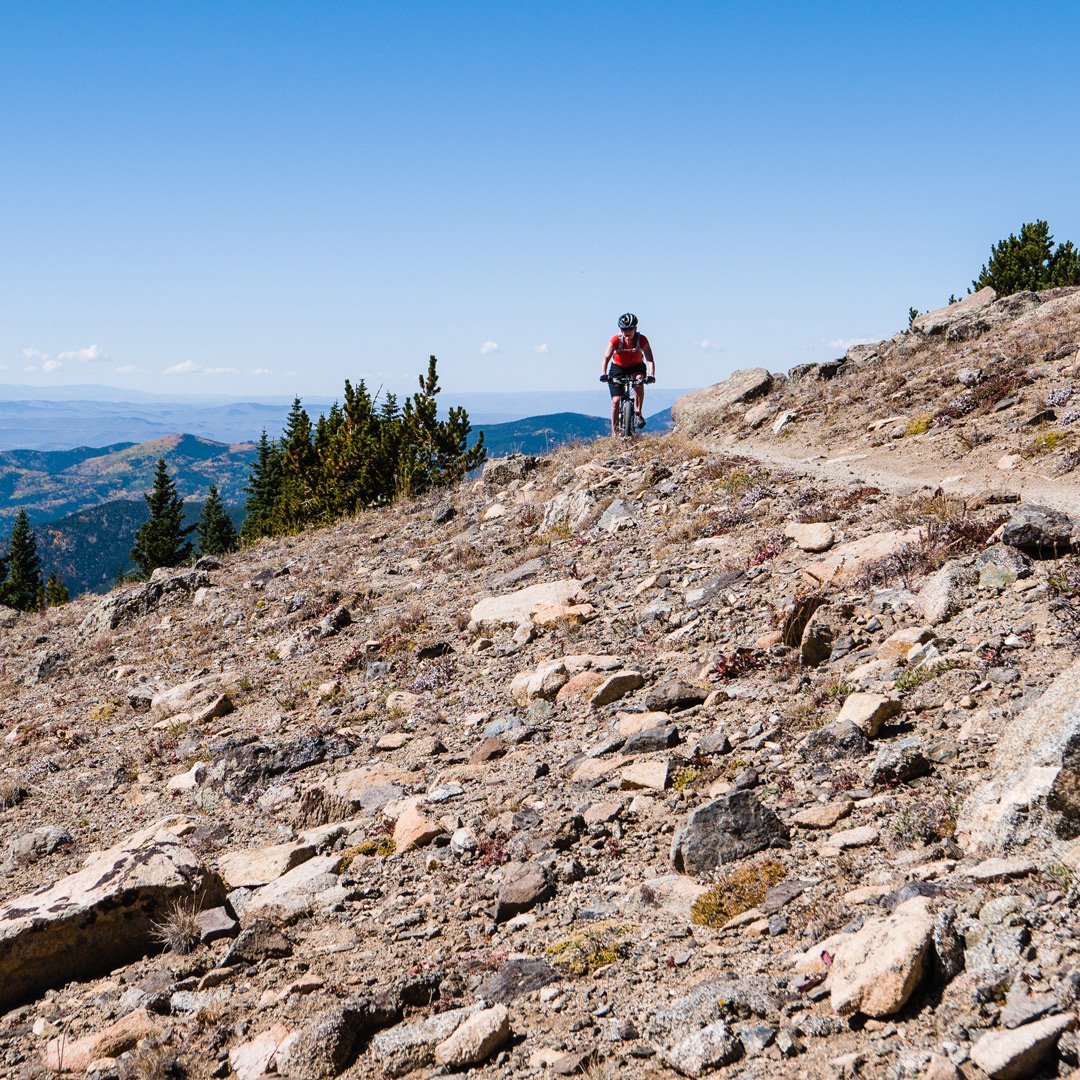 Sometimes only the highest will do. This challenging trail begins at the top of the world– at well over 11,000 feet in elevation—then goes around and down and back from there. From the Continental Divide atop Monarch Pass, the world seems populated exclusively with majestic mountains in every direction. It’s a stunning sight. This high-elevation trail stays blanketed in snow until at least June, so make plans for summer and early fall treks only. Most of the trails are exposed and above treeline and defined by many ascents and descents along high ridges. From the main Crest trail, there are many choices to make. Take the fork to the South Fooses Creek Trail, the experts-only Greens Creek Trail, Agate Creek or many more. Connect to the Methodist Mountain Trail system by taking Silver Creek to Rainbow Trail/Meers Junction. Shuttle services for mountain bikers are available in Salida and Poncha Springs.